And so it begins

It started a few months ago when a Tumblr follower asked if I offered a bumper sticker of an image I had posted that depicted invisible illness. I explained that I wasn’t the artist, I had simply shared it. I wished them luck in finding the artist.

But then I starting thinking about it. This wasn’t the first time someone had asked me about a bumper sticker. I liked the idea. I’ve never put bumper stickers on my car, but this is one I’d like to have!

I looked around online and didn’t find what I was looking for. There were stickers with only text, or with stick figures to represent people, and those are fine, but it wasn’t what I wanted. So why not make my own?

I can’t draw at all, so I hired an artist friend, the awesome and talented Kate Estrop (check out her site!) I gave her some design specs and took her input. We went back and forth and this is the result!

There are two versions of this design:

1) An image of six people: a POC woman in a hijab with a cane, with her hand on the shoulder of a boy in a red team jersey using crutches, a man wearing a kippah with his arm around a woman wearing a t-shirt with a rainbow on it, a POC man in a wheelchair showing an item to a grey-haired woman with a service dog laying at her feet. To the right of this image is white text on a purple background that says “Not all disabilities look the same chronicillnesstruths.com” (above)

2) The same image of people with the same text in black beneath the image. (below)

And then there were shirts

Part way through the process, a friend told me she’d like the image on a t-shirt to help counter some harassment she’d recently faced. So I asked Kate friend to make a t-shirt-compatible design, too. And suddenly, there were also mugs, phone cases, tote bags, water bottles (like the one I’m holding below,) and more! 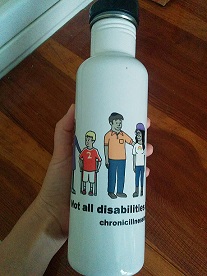 Where to get yours

I’m very excited for this. The next time someone says “But you don’t look sick,” or gives me dirty stares for parking in a handicapped parking space and I don’t know what to say, I can just point to these instead! If you’d like one, you can find them here: http://www.zazzle.com/chronicillnesstruths*

And while you’re checking out the new store, it would be really awesome if you’d share the link, too! Let’s get everyone talking about and aware of invisible disabilities!