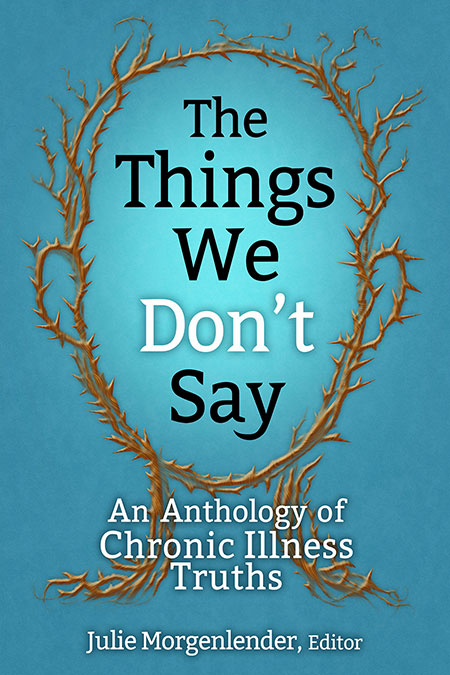 It’s time to turn The Things We Don’t Say: An Anthology of Chronic Illness Truths into an audiobook so that anyone who can’t or prefers not to read the book will have access in a different format. Audiobook production is pricey. Waiting for ebook and paperback sales to fund it will take years. Let’s not wait!

A Kickstarter campaign is a lot of work, but if it succeeds, the audiobook should be available in 2022! The catch is that if we don’t raise the full goal amount, then we get nothing. That means we need a plan. I’ve got that, but I need help implementing it.

If you think you might want to help, please fill out the form and let me know in which of the ways listed below you’d like to volunteer.

Right-hand person. This person will be my go-to. I’ll run ideas by you. You’ll give me your honest opinion. You’ll read what I write and watch the videos I create for the Kickstarter campaign page, and you’ll tell me what to change for the best results. During the campaign itself, you’ll help me post about it on social media and you will help to engage the street team (see below.) This is the most involved role, and the most time-intensive, but I’ll try to keep the time commitment reasonable. You need to be on at least Facebook and one other social media platform, and you need to really understand how they work and how to best engage people. Timeline: we’ll start to create the campaign in November with an hour or two of work every week or two. Near-daily involvement on social media during the campaign. The campaign will run for 3 or 4 weeks some time in January and/ orFebruary 2022 (dates tbd.)

Social media and/or Kickstarter advisor. This can be the same as the right-hand person or someone else. Please help me to engage folks and spread the word about the campaign! I know some stuff about social media and I know some stuff about Kickstarter, but I don’t feel that I know nearly enough about either one to make this campaign successful. Yet. With your help, I bet it could happen! Timeline: an hour or two of picking your brain and getting your advice in the next month, plus occasional check-ins as I prepare things from November through January. Or you could be even more involved if you want.

Graphic designer. I can make a sort of ok graphic, but for this campaign to be successful, I need something that’s a lot more than sort of ok. I need someone with an eye for this sort of thing to help me figure out what will grab people’s attention, and for them to create those images. Needed: a couple of images and banners for the Kickstarter page and a few images to post on social media (if you can’t do them all, the Kickstarter images are a higher priority). Timeline: Discussing things in November and getting all images by mid-January.

Street team. You’ve probably never heard of this term, and neither had I until I joined a street team for someone else’s Kickstarter earlier this year. This is fun and easy, and also super important for the success of the campaign. As a member of the street team you will tell people about the Kickstarter campaign at least 3 times during the campaign. These can be mass emails to family and friends, posts on social media, or other outreach efforts. In exchange you will get a free copy of the ebook along with some other perks and possibly prizes. Timeline: during the campaign in January and/or February (dates tbd, will span 3 or 4 weeks.)

How much are you trying to raise?

The audiobook production will cost at least $2500, but my top choice production company will cost $3500. Once I account for Kickstarter fees and prize costs, the goal will probably be $4000, with a stretch goal of $5000. (That means the goal will be set at $4000, and if we reach that early, then we’ll ask for an additional $1000 to go with my top choice for production.) These are estimates, and I’ll recalculate with some input from the right-hand person.

Aren’t there cheaper ways to do this?

Yes and no. I could record the book myself, except I can’t due to my physical limitations. I could take a profit-sharing approach, except I can’t because the book’s sales aren’t high enough to qualify for that, plus it would limit my ability to give away free copies, which is important to me. I could use Amazon’s program through Audible, which is a lot cheaper, but that would also limit my ability to give away free copies, plus it would tie me exclusively to Amazon for a while and that would mean no access for libraries. (Plus, Audible really screwed over authors recently, and I’m not planning to put the audiobook into Audible at all until they improve a lot more.) Given all of that, I feel that funding the project via Kickstarter is the best approach. I just need your help to make that happen!

What if I want to help but none of these roles are a good fit for me?

Join the email list here so you’ll be the first to know about any new volunteer opportunities. I’m sure there will be more! Also, share this link on social media and with anyone you know anyone who might be interested in helping with the Kickstarter campaign in the ways mentioned above. You never know who might want to help out!